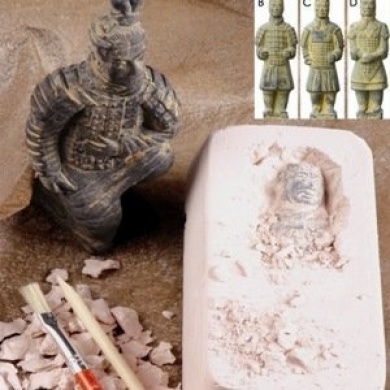 Join us to be part of one of the most exciting archeological discoveries of the 20th century!

Dig out your own "Terra-Cotta Warrior" of the Qin Empire.

Highlights
-Pretend you're an archaeologist with the Excavation Kit!
-Excavate a 10-inch reproduction of a 2,200-year-old warrior like the hundreds that were buried with China's first emperor
-Learn more about the Qin emperor's world-famous terra-cotta army
-Contains excavation block, brushes, excavation tool, paint tablets and booklet ''How to Become an Archaeologist''
-For ages 7 and up -- instruction booklet included


Background Information
Terra Cotta Armies discovered in 1974 by local farmers in Lintong District, Xi'an, Shaanxi province. The figures vary in height according to their roles, with the tallest being the generals. The figures include warriors, chariots and horses. Estimates from 2007 were that the three pits containing the Terracotta Army held more than 8,000 soldiers, 130 chariots with 520 horses and 150 cavalry horses, the majority of which remained buried in the pits nearby Qin Shi Huang's mausoleum.Other terracotta non-military figures were found in other pits, including officials, acrobats, strongmen and musicians.